In June 1996, We purchased "Forethought of Gosport" in Lymington, for rather less cost than a new Laser 4000.
She is a 3/4 fractional rigged 5 foot draft version with an inboard Diesel engine. Hull number 309 (on makers plate also pencilled on the underside of all the cabin locker covers) , original sail number 310
Since her purchase we have alternated between cruising around the Solent in her, and repairing the wear and tear of her 20 year life.
This picture was taken in Lulworth Cove, on the south coast of Dorset. It was on the evening of our 10th wedding anniversary, in 1996. 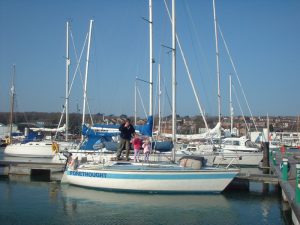 And this is Forethought in East Cowes in March 2003. She now sports sail number GBR9624R