Page rescued from Google Cache . Oops.
This is about  the 10th anniversary of our purchase of  Forethought . More things need replacing that we fitted new when we bought her. Sails are holding up well from the late 90's. Just as well we bought Pentex/Mylar with taffeta protection. More expensive but durable.

The year included finally replacing the headlining in the main cabin, and suffering mild sideffects of exposure to the toxic foam dust.

I went on a VHF DSC course and now the old Seavoice VHF is playing up. It seems to recieve for few minutes and then go dead . After a lot of effort, it turned out a plug was being pushed out of a socket by a stiff cable inside from the channel switch to the main PCB. It wasnt going dead, just jumping to a different channel dependent on how far the plug wobbled out.

Some days before the race, I was just checking through the tides, assuming as usual that the race would be a bit of a battle to make it to the Needles to get there as the tide turned .  I was shocked to discover that  our allocated start time was 0800 and the HW time was 0450. This meant that the earliest we could reach Hurst Narrows with favourable winds was about the time the tide turned hard against us. The Needles is several miles and over an hour further on. The forecast was for light NW wind with a seabreeze that was SW.

At that point I realised we had little hope of making it around, and I knew that if we hadnt made the needles by 1400 we would probably not make it around the Island before 2200.

Friday night we went for a practice sail and a get-together. Andy couldnt make it but we went to watch the VOR starters as they passed Cowes.
We saw them from a distance and then later saw the hospitality motor yacht for "Pirates of the Carribean" perform a "Jack Sparrow"-style coming alongside with a downtide approach to Port Hamble taking about five attempts, rather than putting their beautiful fender-socked fenders on to the other side of the boat .... Dont worry, I guys will go and watch the film ... 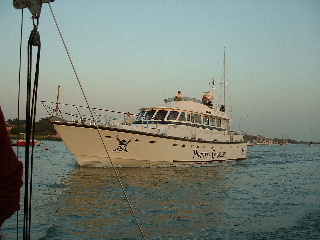 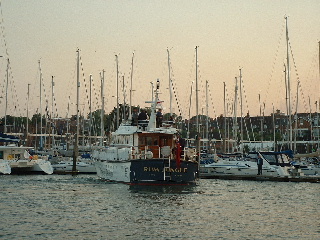 The tide is going from right to left in the second picture...

Saturday 0600 Hamble Public pontoon for the crew pickup: Start time 0800 as part of the second-to-last ISC group. I slept on the boat and was woken up at 0430 by the oystercatchers. Looked up at theperspex hatch and thought it was covered in seagull droppings but it turned out to be my keys which I had dropped on the hatch the night before.


Everybody arrived on time . This year Steve made the bacon rolls. As we motored out we were commenting on the brightness and the beauty of the morning. We also commented on the lack of wind and the high haze that made a good seabreeze less likely. 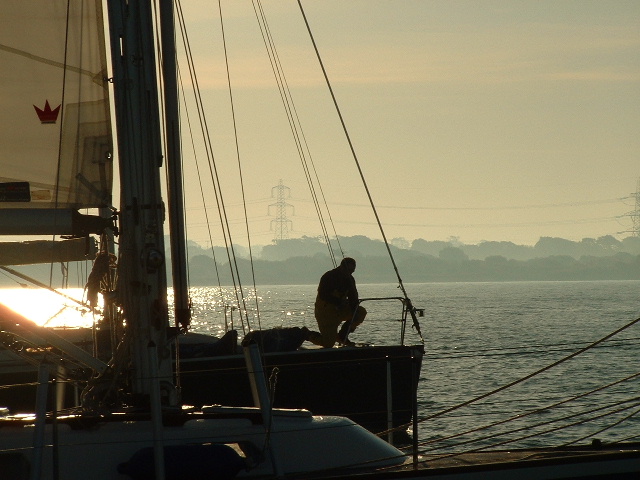 but we passed Hurst three times pointing the same way

We put up the sails early and sailed around to get a feel for the speed and direction of the wind .
The northerly wind seemed stronger than expected. This was actually going to be a bad thing when coupled with the weakened sea breeze.

It looked like the West Brambles end of the line was favoured with the wind as that gave a spinnaker reach down to Hurst. Of course tempered with that was the knowledge of  the fact that we had longer boats in our start group who would be rolling over us as we sailed down.
What actually happened was that 'knots' of stopped boats would appear and we could avoid most of them.

Quite a few times we shot through the lee of single bigger boats, but more often we would find ourselves having to luff hard or drop back then go through to windward.

We saw a single GK24 who started in clearer wind go heading off towards Hurst and gain about a mile on us. They vanished into a line of boats and that was the last we saw of them. 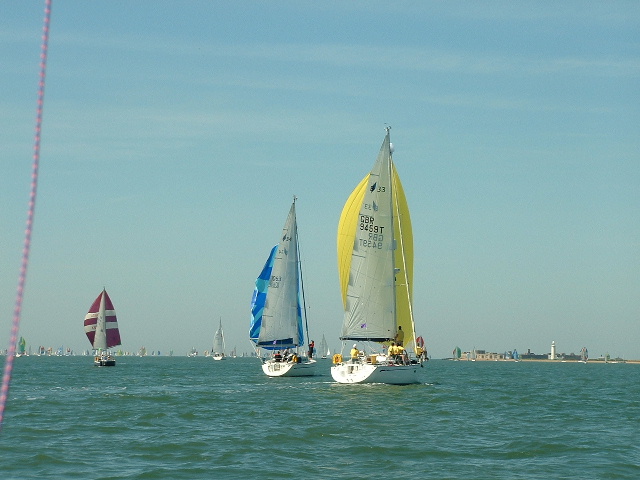 We passed boats with these with cruising chutes as the wind came more from astern and they had trouble keeping them filled, apart from boats which goosewinged the chutes with a pole.
We kept a lookout for the wind and tried to stay in it. As we neared Lymington the wind came more astern and we then spent time and effort never sailing deeper than a broad reach . The fractional rig with extreme spreader sweepback doesnt like running.  We also had a plan - to go close inshore at Hurst and then try to go up the Shingles bank.  So we worked our way to the anchorage off Hurst where
we gybed and started to sail to the point.

Boats anchored in the anchorage were under constant attack from the drifters coming through - they probably thought they were going to see the fleet from a distance but actually they were in the thick of the action.

Already to the south the fleet was going backwards. Over in Totland Bay and out to NE Shingles buoy there was a line of boats stopped and sailing in random directions with and without spinnakers up.

As it turned out we should have anchored at Hurst in the anchorage there and waited for the sea breeze. Even then it was probably too late to make it round the Island in time.


Hurst in the rush hour 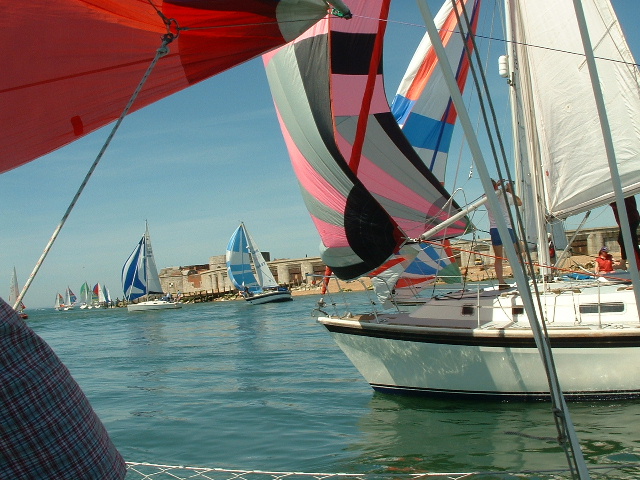 Coming to the point we discovered several things. We were still making against the tide. A stream of boats outside us took the wind. Four  boats inside us requested water. And there was a GK29, Galloping Kougar and another boat aground on the tip of the spit. We were forced out into the tide, we couldnt get back through to the inside by cutting across transoms. We needed to be over with the spinnakers cutting along the spit. (1st pass of Hurst Castle)

At this point the race finished for us.  We did many gybes at this point as the wind swirled around  the boats .

We managed to get to 0.3 NM from NE Shingles with the wind behind us but the next problem was that the wind to the east of the Narrows was blowing NE and the wind to the west of the Narrows was blowing SW. The tide was at this point still only 1 to 2 knots going NE. The trouble was that you would run against the tide until the wind changed , drop the spinnaker and then try to beat into the SW wind.
At the seabreeze boundary, different parts of the rig were in opposite wind directions.  Seabreeze at sea level , gradient breeze higher up..
The tide would then push you back into the NE wind and the cycle would repeat.

Meanwhile the whole group of boats would have drifted back east, into the next boats behind you. The seabreeze boundary would also move NE with the tide. So we spent about an hour on this boundary being pushed back up the Solent (2nd pass of Hurst Castle) until we were east of Lymington.

We came very close to ramming several boats when we ended up as one of the upwind boats running into the back of  other stopped boats at the boundary. On one occasion we had to stop by violently turning 135 degrees  as there was no way out ahead or to either side, in a manoever which only I dared attempt, as I have most confidence in the turning circle of the boat.
Its quite stressful helming a boat which is running into the back of other boats almost out of control.


Andy relaxing while we sailed back to Hurst 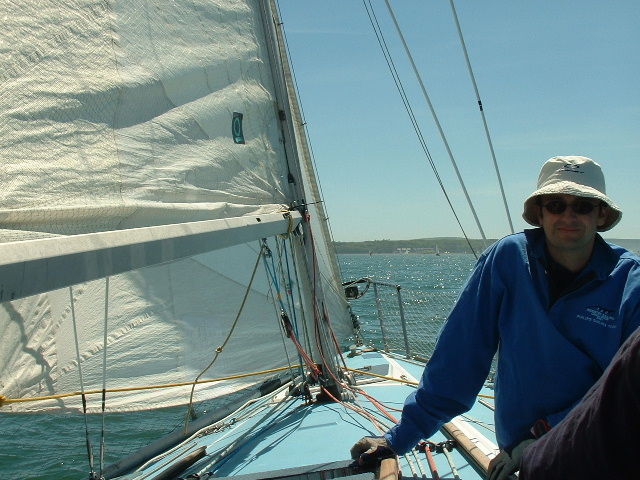 The seabreeze then filled in and we were able to sail back up to Hurst and arrived there again three hours later (3rd pass of Hurst Castle) . By now the breeze was strong enough to beat through the narrows and head west . But we were only making about 2 knots over the ground and the Needles were still another two to three hours away at that sort of speed. No way we could finish the RTI if we were only at the Needles at a time when we should have been looking at Ryde. 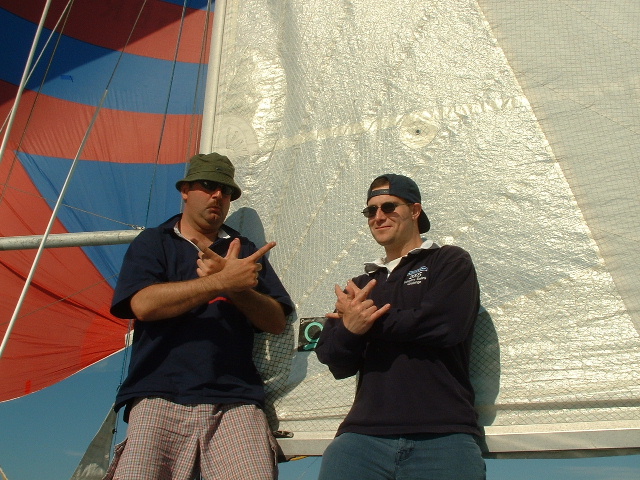 So we had a chill-out run back to Lepe where the ebbing tide finally stopped us at about 1730, so put on the engine and went back to Hamble, arriving at 1900.

Tired and fairly happy despite not getting very far.
We did our best as a team and nothing was messed up or got broken.
The weather was against us, but the sunshine and sea breeze made it into a pleasant but rather expensive cruise to Hurst.

A week earlier we would have been battered and possibly failing because of gear breakages in strong winds.

It would have been worse the day after, despite the tide being later today : Bramblemet is still reporting less than 2 knots since 0800 on Sunday 4th June, and the Lymington Starting Platform station is reporting less wind than on the 3rd at the same time..

Since last year when there was a loud bang from the propellor shaft and it slipped clear of the semirigid coupler , I have had trouble with some vibration and rattles at low speed. I put this down to a loose anode on the shaft which I know is still wobbling around. I removed the anode after a swim in the sea, but still the vibration.

Many attempts to clear up alignment of the prop shaft had not really resolved the problem.

I wanted to take a look around the engine so :

I lifted the engine forward into the middle of the cabin on the mainsheet, and noticed an almost-square piece of non-rusty mild steel plate lying in the bilge.  It showed signs of being worn by rubbing and rotation.

I looked around the engine but couldnt see any matching places where such  a piece of metal could have fallen from.

I cleaned up the engine, put more hammerite on some rusty patches and then I noticed a lot of play on one of the bolts in the coupling . I looked at the after end of the plastic 'star' and could immediately see that the piece of metal had come from the middle of one of the straps which supports the  ends of bolts which attach the 'star' to the gearbox drive plate. One of the bolts had its thread worn off from all the flapping about so that needed replacement as well.

A trip to French & Son in Netley and they made me a new strap for Ł15. I fitted it and so far no vibrations, the engine runs faster and I can do about 0.25 knot more under engine.

Had outboard motor stolen for the Avon so I will enter 2007 with a twostroke engine on 10:1 fuel/oil mix. Its a 1977 British Silver Seagull and it is getting me in training for getting a heavier fourstroke when I finally buy a new engine. Anything will seem light after a Seagull. I will be going about in a cloud of oil smoke. I will buy a new carburettor needle for it if I keep on using it that takes it to 25:1 fuel:oil