All this on a quarter  tonner. It obviously refers to how much junk one can remove from the boat.

Just before the race I upgraded the spinnaker arrangements with new ball bearing cheek blocks. Hoped to check out all systems including the crew on the Wednesday evening before the race but there was a gale.
Saturday 0600 Port Hamble: Start time 0730 as part of the last ISC group.
The crew was

Everybody arrived on time and we set off, having a cup of tea and I made some bacon rolls despite the boat pitching badly. I sat down on the custom cookie-seat next to the cooker so I didnt need to feel seasick.

We gradually worked our way down to the start line and were about 300m off the Squadron as our gun went. At least this time we were facing the right way and only about a minute off the line.
We methodically hoisted the spinnaker and then set off  to windward of most of the boats in the same start. We kept just offshore and stayed in the wind and tide. The spinnaker was dropped near Newtown river and hoisted the number 1 as the apparent wind went too far ahead. We decided to change up to the heavier spinnaker sheets in future as the 8mm ones have too much stretch in these conditions.
We luffed up to avoid being rolled by Suhaili at this point. We took the Island side line down to past Warden and then changed down to the number 2 genoa, as the wind had built up and we could see the boats ahead in the wind heeling even more.  We kept up a good speed over the ground helped by the tide.

Around the Needles the wind came in gusts, and we found ourselves hardening up and crossing the Bridge inside the Varvassi like usual even though commonsense says go outside. The melee of stalled boats make it  look more threatening to go outside. Coming through we meet the waves but seem to be maintaining a good speed compared to the other boats around us. Perhaps having about 400kg of lard on the windward side was working.
The colour of the racing flags around us went from purple to white about half way to St Cats. We were overtaking boats that had started 10 minutes earlier.
We then stayed close to the Island being sheperded off by one of the local Lifeboats. Once we got on the track we had a good long tack to south of Brook  Ledges before heading more southerly.
The rain started and we began getting damp. A few waves came on deck but generally Nick and myself took the boat round the worst of the waves.


Another tack to the east and then we had our first Incident, sailing over a well-marked lobster pot. I was helming and predicted the rope would be trailing the opposite way to reality. We were very lucky, it ran down the front of the keel and then just hooked the bottom of the rudder before a wave bounced us off. We lost about 30 seconds max here as I didnt even change course and we didnt stop.
As we got nearer St Cats we headed offshore to get into the conveyor belt of tide going east. We saw the track on Port tack end up being down to 170 degrees as the tide pushed east. Hope to go and commune with the GPS and get the track log.
A final tack and we rounded St Cats about 1215 ish. It had been  a long hard flog and we were tired. Just about half way. 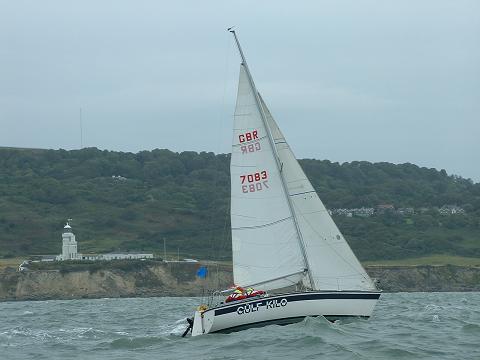 At this point the blue flagged boats from the 0710 start began to appear, and we went past one GK24 "Gulf Kilo" who had only 2 crew on deck and a reef in the main. Andy the new owner tells me it was his first RTI in Gulf Kilo and there was a third crew member calling for Huey.

More boats were passed but some of  the larger boats from our class passed us again on the fetch to Bembridge. We had lunch and Erfaan took the helm for a while as we closed on Bembridge.

The rounding of the mark was fairly wide as we had 3 boats inside us. As the leg was a run it really did not matter. We hoisted the spinnaker and then had to fight off a couple of 33 footers without spinnakers who sandwiched us and then took us off  to the island side to the point where we would be running by the lee to lay the forts.  We outran the boat on our right, sailed through its lee and then had to gybe to get out of trouble.
Then we had the problem that we were only rigged with single spinnaker sheets. Nick had quite a fight with the spinnaker , having to overcome not only its tendency to leap around but also random rope releasing from misinterpreted commands from the cockpit. A second gybe and then we lined up with No Mans Land fort. All the way down we were treated to the sight and sound of people losing it with spinnakers. Death rolling a Laser 1 has much the same feeling as that leg.
Music thumping away from the Fort we dropped the spinnaker as it looked like too much wind for the sail.  At this point we resumed using the Number 2.


And then somebody created Incident number 2 by threading the spinnaker pole through the kicking strap and the pulpit (NB the pole about 20cm longer than J , shortened a bit after a collision, bodged up with epoxy bandages, so it won't go quietly) so I couldnt release the main as we hurtled south round the back of the Fort and back  towards Ryde sands. Once that was resolved by releasing the kicker and sheeting the main after the gust had gone we were off.  The wind gradually dropped after Ryde and we went up to the Number 1. A bit later I realised we could use the spinnaker again.

The command "pole up" had an equivalent in Franglais "=Pull Up" and so the spinnaker was pulled out of the bag instead of the pole going up. I shouted "stop" and then somebody else correctly shouted "pull it up!" but too late. It went over the starboard bow and we sailed over it. I am sure I turned to starboard for some reason at the same time. Because it didnt fill it just went as a sausage under the boat. I rounded up to drop the boat speed and we managed to get it back on deck after dragging it up on the port hand guy.
While we were tidying up the mess we went back on course, the wind was building in the gusts but the lulls were too quiet for white sail reaching.
So we re-packed the spinnaker after the clear up and with no disaster in sight, Beken's photographers came along. After they left I realised we were 3 miles from the finish and going too slowly.
I decided to have another go at hoisting the spinnaker, and then we saw the split, neatly aligned with a radial panel near the middle of the sail. It didnt look too bad and wasnt trying to open up too much. Then a mild squall from the next front came through and it started pouring with rain as well as the wind increasing. We had not taken the genoa down and I decided to ban foredeck activity. The GPS was indicating over 8 knots and this was against the tide. The mainsail was lying in dead air, the genoa and the spinnaker were pulling hard. Nick says the stern was lifting and the bow was sinking. The rudder felt neutral but less responsive than usual with the whole crew apart from Nick back in or by the cockpit.  Sadly this didnt last and again the wind came ahead of the beam. We dropped the spinnaker and then sailed into the edge of  the hole in the wind at Castle Point. Mindful of being in the wrong place last year we reached off shore and then picked up the new wind when lined up with the northern end of the southern line. We sailed around about 20 boats here .

Our finish was after 8 hours 30 minutes which was quite respectable. We nearly spoilt it all when we whacked Blade Runner 2 (the declaration barge) after somebody pushed inside us and stopped despite frantic shouts and waving from the barge.
They were just in front of us leaving us stopped and weathercocking up into the wind.  A few vigorous bursts with the engine to complete 90 degrees turn in a short gap - I wasnt going around anything again  and we nearly made it , with a fender in the gap between the ship and ourselves. Unfortunately Blade Runner has ship-sized fixed hard  rubber fenders that were able to give one of the stanchions a good twang. Fortunately this is the one I reinforced since the last time somebody ripped it out .

Then back to Hamble (as we were tired) only to realise that we really had wanted to go to Cowes as we passed Hamble Point , once we had relaxed with a cup of tea and some more food. Back in the marina by 1730. Amazing.

A week before it  was raining and a bit windy. Nothing serious. But what if the RTI had been a week later ..

According to the Bramble Met weather station http://www.bramblemet.co.uk or http://www.bramblemet.co.uk/wap for those with mobile phones that can swallow that URL ,  the wind was 27 knots gusting to 32 knots, and we passed it an hour in the future (clock double compensated for BST ??). I used my mobile when we got into Cowes to check on the history. Actually only the WAP link seems to work (5th July 2004)  which is the opposite of "normal" websites. The main URL just indicates 'testing'.

We passed about 500m downwind of the home of the weather station. We had the number 3 or 100% of foretriangle genoa up, no mainsail at all, and the tide going west made up for leeway to the east.
As a result with a southwesterly wind we were still making to windward in some fashion.

The Cowes Lifeboat came over to us from the northeast and then went off, probably because they could see a lot of our deck facing east with waves breaking over it  near the Brambles. At closer approach they could see we were actually going south at about 6 knots.

When we got back we found that there had been a Sunsail boat sunk after a collision a couple of hours before near the Brambles. Maybe their concern was that we might be near the wreck.  One of the two Sunsail boats involved in the collision had managed to return to Port Solent, probably with that lifeboat in attendance.

Down below, water from the tap in the sink was missing the sink and lying in a pool at the back of the work surface. It was almost easier to stand on the sides of lockers than on the floor..

At about this point we decided to carry on as things had reached a steady state of wetness and heeling and the Island beckoned. We knew it would get quiter once we tucked in against the shore and it did.

We made it to the Island at Castle Point, covered in spray and with the leeward stanchions cutting through the waves. About the bottom third of the sail was working the rest was flogging.

Of course Cowes was full of sailors who hadnt gone anywhere and so the marinas were crowded. Only sailing school boats were out.

Because of our high speed (for us) we managed about 90 minutes from Hamble to Cowes.