In late 1997, we had a baby on the way , and I wanted a nice warm boat so that nappy changing etc. could take place in comfort. My Abbey National Shares had crossed the thousand pound level and so I sold them, giving me a budget of about &pound;1000 for a heater.

This describes the choices I made in determining which kind of heater to choose.

Catalytic Gas heaters are described both as excellent heaters and as sources of condensation . These would also need a piped gas installation. We use a gimballed two burner camping Gaz stove with an integral bottle, (meaning there are fewer pipe joints to leak), so there was no piped gas, but a tank full of Diesel was available. On a small boat like the GK24 there isn't a lot of room for a gas cylinder in any cockpit locker space without a lot of work.. but I expect that I will have to do it eventually.

For example Taylors are quite large and there was any space for one in a boat with 1.4m headroom. The same went for liquid fuelled equivalents also with chimneys. A bit out of keeping with a Quarter Tonner. I wasn't sure about pouring diesel, charcoal , paraffin or similar around in the cabin as I am not too tidy...

These use a combustion chamber, burning gas, petrol, paraffin or diesel. This chamber is cooled through a heat exchanger with an independent air flow which is fed into the cabin. There are five pipes attsached to the heater each with its own needs. Fuel, combustion air in, exhaust, fresh air in and hot air out. The combustion exhaust is kept away from the cabin air for obvious reasons. The exhaust pipe is a lagged flexible stainless steel tube, which is normally led to the transom. The air inlet pipe is kept away from the exhaust for safety reasons. The problem with these is high cost. The Abbey National Shares being "free money" would cover any heating option including these.

I did not want damp or the risk of carbon monoxide so I went for an air heater.
The lift out was scheduled for 6 Jan 1998 but Force 10 winds delayed the lift out until 17th Jan. The boat was placed just below the stern of the spare "Merit Cup" Whitbread 60. 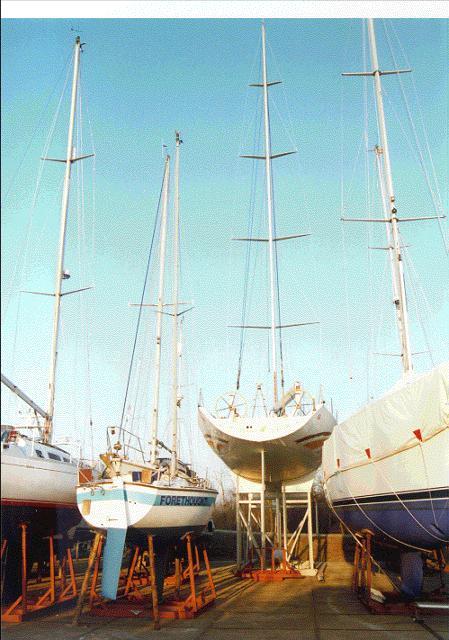 At the London Boat Show I first visited the stands selling Eberspacher and Wallas heaters. I had set my sights on Eberspacher as it was small and compact. I just happened to pass a stand selling Webasto heaters and saw this was even smaller. The Wallas heater on the other hand looked like it needed a fairly large vertical panel to mount it. There may have been others but they appeared to be hand-made from bits and pieces.
I went to the dealer (BK Electro Marine)later at Hamble Point , a mere 200 metres from where Forethought was standing, and bought a single outlet heater installation kit for &pound;875. It came in a huge box that only just fitted in the car, but this was mostly taken up with pipework. The heater proper, a neat plastic box was in a smaller box inside. BK electro marine also quoted for installation, but another 400 pounds or so was beyond my budget. I wonder where they would have put it ?
Then came the agony of where to fit it on the boat. Obviously the exhaust would exit from the transom, preferably at a lower level than the heater. The Webasto notes suggested a cockpit locker.
The heater needed a 60 mm hole for air intake for cabin air and a sensible route for the ducting into the cabin. It would run on either 12 or 24 volts as far as I could tell from the translated instrucion manual, which was also heavy on German transport regulations.
The heater could be rolled +/- 90 degrees around its long axis but had to be mounted with the combustion chamber pointing level or down so any transverse mounting positions were out, as the GK24 manages more than 30 degrees of heel without any trouble! (useful crossing Brambles bank with minus1 foot on the echo sounder)

Ideas about fitting under the cockpit floor were tried out but access to the heater would be limited, and there has often been warm sea water around. That would not be too healthy for electronics. The heater would be additionally warmed by the engine nearby. In fact the electronics are encapsulated to allow fitting outside the cabin of a vehicle. Just not directly in spray or solid water.

I tried the idea of mounting the heater vertically at the aft end of a quarter berth. The heater would be inside the cabin with hot exhaust hose in the stern locker, but hot air ducting would be inside the cabin open to touch, unless I boxed it in. So the stern locker was all that was left.
I discovered that the cockpit coamings were high enough and wide enough to fit the heater inside. From there, air could be taken from inside the locker for combustion (with advantage of forcing air circulation within the smelly locker, and clean air from the cockpit for the cabin.
The lockers under the quarter berth on the GK have just adequate height at the aft end to fit the 60 mm heating air hose, so I could lead the hose forwards. The outlet was fitted just below the companion way.
To fit the heater itself, I drilled holes for and fitted the bracket inside the coaming and then fiddled around with the heater until it went into place.

The exhaust was routed as recommended through to the transom. I could not manage to get rid of a low loop in the exhaust, so I made the final high loop as high as possible.The combustion air was drawn in from the stern locker, and the cabin air intake was cut above the bottom of the cockpit, high enough that it would not be kicked . It is also clear of water that collects in the cockpit when the hull is travelling fast
I was concerned that the air intake hole for the heater was twice as large as the cockpit drains. I wanted any water to go out the right way from the cockpit. I Putting the heater high up hopefully will stop the water going in through it.

I made several mistakes while fitting the heater.

The first was mounting the L shaped mounting bracket too high and too far aft, where the coaming was tapered to less than the size of the heater. The heater was about 2 cm too large.
Fortunately I was able to simply turn the bracket over and lower the heater. The fixing bolts were not too long as the nuts almost touch the heater.

Then I discovered that these heaters have the hot air end on the opposite end to the hot exhaust end, so there would always be a crossover of hot and cold pipes. At first I tried the hot air outlet facing aft with the hot air pipe led over the heater and then forward. This led to a more direct exhaust run, as I thought that this would radiate the most heat. However as I was able to double lag the exhaust with surplus lagging (I only needed half of the length of exhaust hose) it was not too hot. The hose carrying hot air to the cabin is black so it radiates much more.
The microprocessor in the heater did not like this and started flashing up the overheat code on the LED on the thermostat control.. So I rotated the heater 180 degrees and re fixed the pipes. Unfortunately , I managed to unclip the heater body while placing it in, and hot air came out of the heater while little reached the cabin. Removed and reassembled, all went well.
The next problem came on a warmer day. The heater sits in a poorly ventilated space and so the air around it gets hot. So I cut out a ventilation hole high up in the bulkhead to let hot air out of the locker.

Running out of Diesel

Then, because I fitted the heater in winter, I used it every time I was working on the boat. I knew there was about 7 litres in the tank, as I had drained the tank. I was searching for 6 inches of wood at the time , the splintered end of the dip stick, but it had gone.
Shorly after re-launch the heater ran out of diesel fuel and got bubbles in the feed to the heater. The heater produced clouds of unburnt diesel and failed to start.
The next  day while motoring, when the engine began spluttering, I was able to rev the engine hard and make it the 200m to the refuelling berth in 30 second bursts of engine power. Just as well it was slack water in the Hamble at the time !

The heater is quite low power in use but the makers do not state the startup power. Now I have a battery charger with an ammeter (2004) it looks like about 8 to 10 amps draw. So when the glowplug lit up, the voltage drop caused the heater to cut out. I added extra power cables in parallel from the battery to reduce the voltage drop.
Because I forgot to link the ends of the cables near the heater to the old power leads from the batteries I still had the voltage droop trouble until early 2000 when I added a pair of short wire links near the heater power take off.
Even that was not enough, so eventually in late 2005 I  rewired the battery feeds with some 10mm2 car stereo power cabling. Now the battery has to be totally flat before the heater cuts out.

Since overcoming the teething troubles it has proven to be an excellent bit of kit, warming up the boat interior from 5 to at least 20 degrees C if the hatch is shut.
We often go down the marina and sit inside the boat in comfort if it is too cold for sailing.
The thermostat provided with the heater is a joke. It knows  "hot = +30degrees C" and "cold = +10 degrees C". Nothing in between. Actually that is more down to the fact the  sensor is placed in a quiet corner where the heat does not reach for a long time .