Stuffed By the Tide

This is a new sailing organisation founded on Saturday 15th May 2000 during an evening in Gosport after a rather depressing day yacht racing in a JOG race with an IRC 0.83 rated boat. Copious amounts of beer were involved. its foundation.

Contents of this page

Have you ever had this happen ?

If so, then you are eligible to join. Just put the engine on, go back to the bar and mention you were 'Stuffed by the Tide'. Simple.
[top]

This is a single instance of  how to be very clever and still be stuffed by the tide. In a race with a 10-5-1-gun sequence and tide taking the fleet over the line , go to somewhere near the favoured line end and motor against the tide checking shore transits to determine when the boat is stationary over the ground.
Divide the speed in knots by 12 (distance travelled in 5 minutes) and go that far up tide of the start line so that when the 5 minute gun goes the engine can be stopped and the boat begins to drift. The stupid bit is to assume that the tide goes in a straight line from where you are to the line. In the case of the Admiralty buoy sometimes used as an ODM at Cowes, there seems to be an offshore set to the flood tide. So as the start gun goes,  watch the ODM go past less  than one boat length away on the wrong side. At this point , turn inshore to use the back eddy at Cowes and start 40 minutes later.
[top]

This is a noted place to stop at Hurst Castle. When about 2 boat lengths from the shore at low water, go aground. This is helped by having no idea that the echo sounder is reading depth of water not depth under the keel (or as we have it on Forethought indicating depth below transducer , in memory of a defunct Seafarer).
Get retrospectively scared by remembering the antics involving the Shingles with only 10cm under the keel not 1.6m !
[top]

I simply present Primadonna  just before Round The Island  2000. Even though they put white duct tape over their name on the transom WE KNOW WHO YOU WERE !. They still made it to the start...

In order to determine when to retire on a race in the Solent, take out your copy of Solent Tides by Peter Bruce (or somebody else's if you dont want to spoil your own copy) and colour in the 2 knot plus tide arrows with a black marker pen. If your upwind course crosses one of these arrows coming against you, retire. You will save lots of wasted time.
[top]

Seen in Poole Harbour near the entrance near Low Water Springs 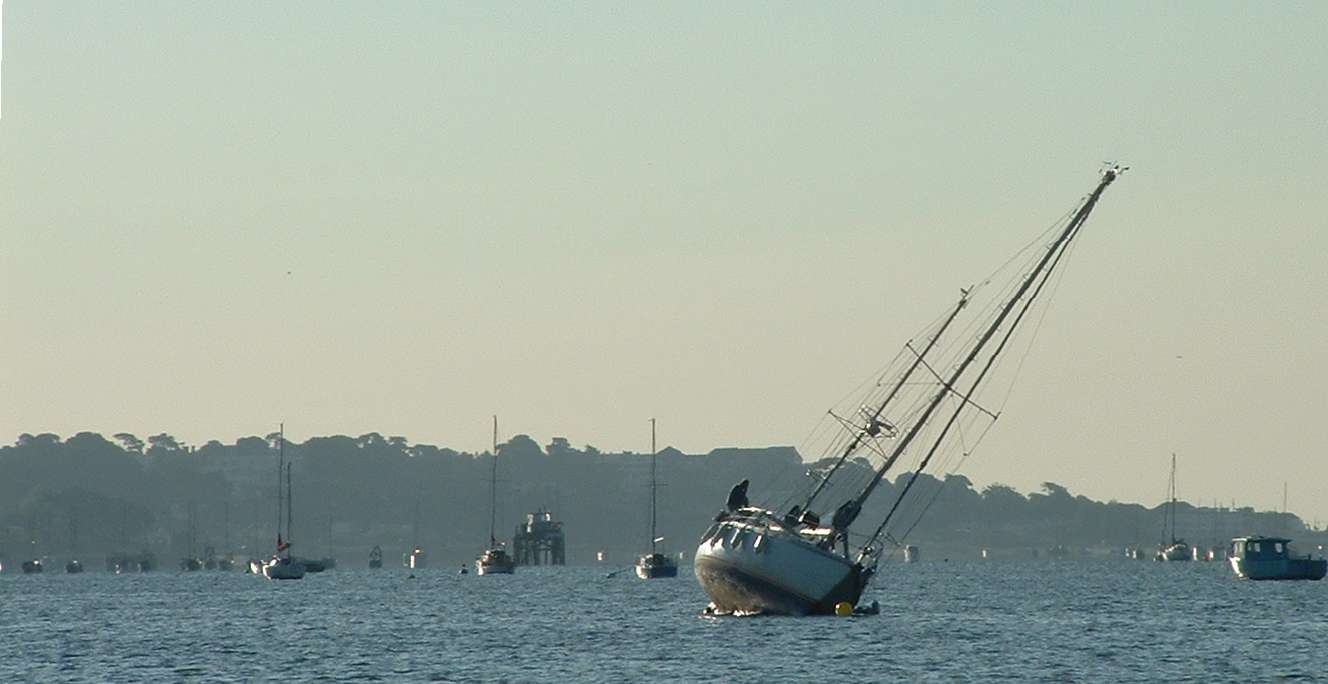 Outside  Dolphin Yacht Haven : Somebody picked the wrong buoy for the 'just pick up one of  the yellow buoys to wait for a berth in the Marina'. The right ones are way out by the main channel. Totally  bouncy and rolly.
[top]

While the focus has so far been on boats that stay afloat, here are some snippets sent in by a contributor to the SBTYC:

In the words of the helm :

And earlier this year, what seems to be an attempt to impale a Laser 1 on a piece of wood but is actually : 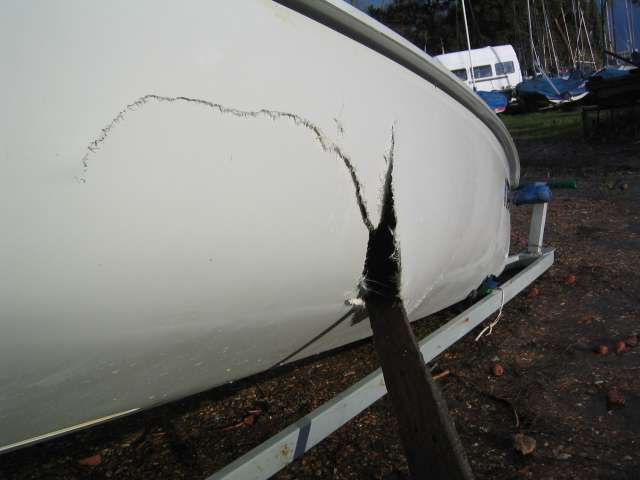 
Safety procedures for the use of sailing boats

Basically the rule is always keep everything tied to the boat including the marina. In this way there can be no accidents at sea. This is especially true for windy days.

The best approach is to use a thin line (about 6mm diameter) which is attached from somewhere near the bows of the boat hanging down in a loop into the water and then attached to somewhere which is not a cleat on the pontoon. At all times make sure the crew cannot see the rope and do not realise that it is there. They will then still be able to enjoy preparing the boat for sea and going as far as casting off and leaping aboard. The boat will then move astern and come gently alongside the neighbouring boat. Use the rope to pull the boat back into the berth. Tie up. Go to the bar and discuss.
Please make sure that you have placed some fenders appropriately for this manoever.

It has been pointed out that twice as much fun can be had if you use a rope that is twice as long.

In fact the crew uncleated the line and we went out for an excellent reach up and down Southampton Water in a F4-F5 with double reefed main and 100% genoa.

This requires a good violent gybe. Crew on the starboard side of the boat are unweighted  as the boat is gybed onto starboard tack, slide across the coachroof , under the guard wires and drag their feet in the sea on the port hand side of the boat.
[top]

As we were leaving Bembridge harbour, I decided to clean the weed off the warps off by trailing them one at a time, while we were motoring. This works pretty well but:
At one point I noticed the boat behind crossing our course quite close astern. I quickly pulled  the warp back in before I caught the boat  .......
[top]