All information here is presented in good faith. It is my personal view that is represented. There is no commercial connection between myself and any establishment listed here except that I spend money in them.

These are the ones that I have visited and so I can claim to have some comment about them.

Pubs in a linear crawl

This pub is in an old building, originally houses. It has been relatively recently altered to provide more space. Dark wood ambiance, excellent for dining as well as drinking.

They have now got a beer garden, first known as "Mustn't Grumble" now the "Cheeky Monkey" garden with childrens swings and a summertime ice cream 'bar'.

There is a good choice of food and drink (Gales beer here). Waiter service for food.

This building has an upper dining area, that I havent yet visited.

Photographed along with wannabe  prime minister in June 2001. It made a good picture, regardless of the eventual outcome of the election.
Downstairs, the bar is again in a dark wood style. I havent been here that often, but I have enjoyed every visit. The blackboard special food is good.
[index]

This pub is unique in Hamble in that it also has coin-op laundry facilities for sailors who are using Hamble Quay. They are to be found downstairs on the Rope Walk side of the pub.

Organises sailing events, and often has a marquee outside in the summer to provide more under-cover space associated with sailing events.
Mount Gay Rum features here.

Bar attached to the Driftwood Restaurant .

There is a small bar to the side of the Driftwood Restaurant building.

Has re-opened and is a very popular pub again with good beer, restaurant-style food with contemporary restaurant style menu. The redevelopment has used features from the old pub and is more 'open' inside but still feels old.  I have been in a few times since the re-opening, tried the food and the enlarged patio on the north side of the pub. This has river views. A pleasant re-addition to the Hamble pub scene.

The pub was found to be older than expected and its structure has been restored by the builders. What was the restaurant and car park is now occupied by houses, so we have a pub without a car park next door to people who paid a lot for their property. Interesting .....

I have not been in here.

Each of the Marina Developments Limited marinas along the river (Hamble Point, Port Hamble and Mercury) on the Hamble side have a bar which serves food. I believe that these are in fact clubs attached to the marina.

Small bar, with views over marina. Exellent home-made soup. Nobody minds if you have a blue face from antifouling paint.
[index]
The Square Rigger, Port Hamble Marina

Gone replaced by luxury flats and yacht brokers, Miss the sticky floor and the sailing memorabilia. Replaced by Banana Wharf.
[index]
The Waterside Restaurant (ex The Gaff Rigger), Mercury Yacht Harbour
Upstairs above the chandlery. I have been in here twice while on the Day Skipper course run by the Hamble School of Yachting back in April.
Not a very large bar, but it has a roof top patio adjacent.  This has nice views over the river and makes a nice change.
The restaurant has been improved since my last visit, so I cant comment any more..
Rumour has it that it has changed from effectively a caravan site bar (just along the access road to the marina), and has now become more up market and attractive as a place to eat out rather than just eat.
[index]

Apart from the food offered by every pub in Hamble there are also other eating places in the village.

There are five establishments that I can think of which can serve drinks with meals. The Dolce Vita is often heavily booked. The pubs as expected fill up in summer and are fairly empty in winter.

Take a look at http://www.ladieswholunch-in-hampshire.co.uk for some other reviews :-)

In a Queen Anne house.  Some tables with  river views.  We went there with friends and were treated to excellent food but the service was relaxed (allow lots of time), in a relaxing environment. When we began to order the starters we got as far as saying 'prawn crackers and .... ' when the waitress vanished, returning later with the crackers. We ordered a lot of food and eat it all but we managed to hit Ł175 for 5 people. The langoustine prawn dish is delicious. (April 2008). Rebranded as Thaiger 2011. Similar food but havent been there since the change.

Feb 2004 Reopened, having taken over the estate agents/yacht charter office next door.
So there is more room ! .Door catch doesnt work so table 19 has to keep tripping the catch so door shuts.
Italian Restaurant. Good (now reduced but favourites still there) choice of Italian food on the menu. Reasonably priced. I enjoy eating here, but the claustrophobic may find the tables quite closely packed. In Feb 1998, they had the 'bar' part removed and the interior re-done. More room now.
Still close packed tables despite expansion.

Indian restaurant with a large seating area. Wide choice on the menu. Does take-away with a discount. I quite often buy take-away from here when the spirit of cooking leaves our house, especially when the scent of curry wafts over ... Menu adds interesting items to the standard Indian repertoire: fish dishes and oriental fusion now feature alongside the kormas. Used to have a website but has gone now.
[index]

Open for food from 1000 to 2230. This restaurant occupies the space where the marina toilets used to be, and a bit of the marina car park. Outside it is not particularly spectacular in the daytime when seen from the land, styled in keeping with the white box of the marina office above,  but it is clearly visible from the river and the marina., and at night it is very well lit up. Outside is a large raised decking area, above the highest flood tides but I noticed inside all the furnishings are movable.
We were cheerfully greeted at the entrance and shown to a table that suited our demands, for five people including two children. The food choice was quite wide, and we were attentively served by cheerful staff. Splitting portions for the children was OK. Pizzas, Pastas and Oriental - style food were all available along with steaks and burgers. The king prawn and scallop was excellent, the chicken breast with vegetables came with a tasty mushroom and bacon gravy or sauce.
The desserts were all created using fresh fruit and good quality ice creams  No cream froth from a can, the cream was poured thinly over the ice cream dishes,  the crepes were large.
This was not particularly cheap Ł120 for 5 people including a bottle of wine and other drinks,  but immediately after having paid €33 a head for starters, a plate of paella and wine in a Valencia, Spain seafront restaurant two days earlier, the value for money was much better than the Spanish experience and the service extremely good.
[index]

This was previously the Hamble Tea Rooms , then Marco's. Have not visited yet (October 2009).
[index]

In this category, there is one place that you can sit down to eat.
Blue Star Cafe , formerly The Kiosk on the quay. 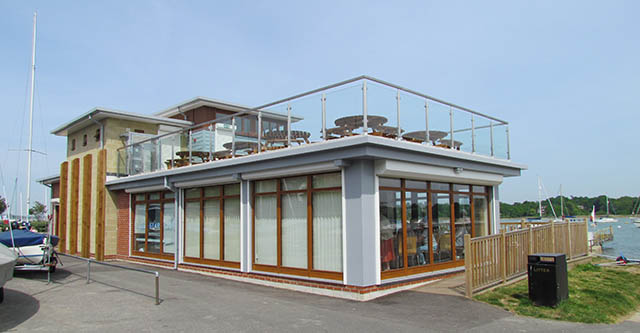 This still has a hatch in the upstream wall, where you can buy teas and ice creams on busy days. Or you can go inside and buy food (cakes, sweets ,  meals e.g all day breakfast or bacon rolls and specials) and drink , and sit inside or outside on the river bank or up on the roof. No toilets , you have to use the public toilets over by the lifeboat house. Visited April 2011
[index]

There is now one post office at Coronation Parade
[index]