Computers and other stuff.

I have an old Philips scope, PM 3217 which had occasional loss of  display and also an occasional twitch on the trace when working normally. In the past I prodded bits of  the scope and it would start working again.

It lives in the garage and was recently exposed to -6 degrees C. At which point the fault became permanent.

With the missing display  - but with brightness turned up and a slow timebase a glow could be seen crossing the faceplate on auto trigger and 50ms/div scan rate.  I looked around all of the circuitry and discovered a severe asymmetry on the voltage fed to the final Y amplifier - one side was at about 6.0 volts and the other was zero. I pulled the Y signal plugs on the amplifier and the scan reappeared on the faceplate. At this point there was about 6 volts on both inputs to the final amplifier. I then  checked the coax cable going from the Y amplifier to the main Y board under the scope. There was 6 ohms on to ground on one end of  the coax and about 1 ohm to ground from the other end of the same cable. The other cable had no short. I eventually extracted the coax - it goes into a flat tin box containing snaked PCB tracks with coax soldered to each end of the box . 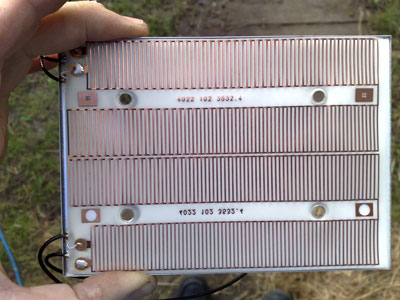 This is the  delay line which delays the Y signals to  allow the trigger point to be shown on the CRT at the fastest timebase speed. The coax is soldered to the double sided thin film based PCB (which melts when soldered...).
To get in the box drill out but keep the four captive hex rivet nuts.
Between the PCB and the case there is a layer of closed cell foam plastic. If you look under the solder pads  you will find little cutouts in the foam for the solder blob to sit in. Only on one side of the PCB so of course the solder blob gets pushed down to touch the case. I lifted up the PCB and the foam and stuck some PVC tape down on the metal then closed the box - I used two of the captive nuts with a fixing bracket and wrapped tape round the end with the coax cables coming out.
I had to take a lot of care to get the box back in, there are a lot of cables running around the scope . The cables get kinked and then you get more short circuits where the coax goes into the tin box. In the end I managed to get it all back in without shorts - I used more tape to protect the coax.

Now to look at  the other scope I have from the same range which had a similar fault (apart from blowing up the PSU when attached to a mains inverter which was hooked up to a dead lead-acid  battery on a charger - 16 volts on the battery - the mains voltage went over 300 volts ....)

I was annoyed by having a slide switch with a blue LED beside it which did nothing. Now I rent a Nokia N95 following a successful 18 months with a Nokia 6233, I wanted to speak Bluetooth (BT) to it.

I had  lost or snapped a couple of BT dongles before I decided to put an internal BT adapter into the Acer. I found one for the Acer 5100 series on Ebay new from a shop. The one you need has a 1mm pitch connector with only 4 wires connected to it.

On the second try the vendor sent me the correct part and I was able to fit it. There is a little bay just behind the right hand speaker deep inside the laptop, and the metallized screening paint is not present just above it. I fitted it, the blue LED would come on and go off with the switch. The provided BlueSoleil software was installed and then I got a BT range of about 1 metre, complete rubbish.
So as I was fixing the wrecked screen hinge fixing points (Acer Aspires are decidedly flimsy) I decided to have another go at fitting the module. So I did the following :

Removed the heatshrink sleeving from the module.  This would be expected to have a de-tuning effect on any antenna inside it. It is also quite likely to be absorbing energy from the antenna and converting it straight to heat. What showed up was a standard CSR USB2.0 based Bluetooth module.


The range increased to about the expected 10 metres in a clear space. Aaargh (talk like a pirate etc.)

I bought the machine from Tescos when I went in for some cooking oil to cook the Christmas dinner, and I think it should have blue and white stripes on the case, in keeping with the Tesco Value brand.
A highish specification machine at the time (Xmas 2006)  let down by a flimsy case, and at the time coming with only 1GB of RAM.

The mechanical construction of these machines is just adequate. After lugging it around in a laptop bag with a load of accessories, I managed to crack the main PCB by flexing the computer in the bag such that if I lifted up the left corner of the machine and actually bent it up about 5mm relative to the keyboard, the WLAN and the Ethernet would work, otherwise the machine would freeze or blue-screen.  I sent it back once with this kind of fault and it was replaced under warranty, the second time I sent it back the fault cleared itself on the way back to Acer so they wouldnt fix it.

So I had to buy another motherboard on Ebay (which came with a free spare battery and webcam, thanks :-) ) and fit it.

At that point I noticed that the case was held together by brass inserts into the plastic of the case, and these had cracked free especially at the screen hinges. In the Dark Ages of the laptop you could expect a die-cast chassis. In the Middle Ages of the laptop, there was still a die-cast frame to which the screen hinges were screwed. Now they simply go into the plastic. Of course they break free with the slightest knock.

I did two things - one was putting a sheet of stiff acrylic plastic in the laptop bag so the laptop would not bend . Then while fitting the Bluetooth module I also re-built the corners of the machine. I chopped up fibreglass tape with scissors into some SP Systems epoxy, and then glued the brass inserts into the case with this and built up the corners filling in internal cavities  with the glass reinforced paste that I had made. I used epoxy as it sticks better than e.g. the polyester resin in Holts car body filler. I used cling film to prevent the screen hinges sticking  to the epoxy, and reassembled it while the epoxy was at the toffee stage.

I have come to expect being driven half mad by their software but I  like their hardware.

This one wasted about 8 hours of hacking and registry cleaning by hand , until I found the resolution on Hauppauge's website. I had by this stage updated the BIOS and the video drivers on my Acer 5103WLMI (dualcore AMD Turion + ATI Mobility Radeon X1300) and WinTV still did not work (but the driver upgrade provided a pleasant surprise resolution of another problem) .

Go to the Acer site for the BIOS and ATI video+chipset drivers for their laptops. I found a driver bundle from April 28 2007. None of the ATI Radeon driver bundles direct from AMD/ATI will install on this machine.
The WinTV application just froze when any analog source (tuner, composite or S-video)  was chosen . I had to reboot the PC, sometimes trying restart twice before it worked in order to stop WinTV although the PC carried on running. This is because the software video path to the display is different for analog and digital TV.
I could watch analog TV on the HVR900 using VideoLan (VLC) which listed all of the capture devices managed by Windows WDM video drivers and  VLC actually let me choose the correct one .

Then I disabled the builtin webcam ( as suggested by Hauppauge amidst many suggestions ) in the Windows hardware manager and WinTV clunked into life with analog TV reception. Why dont Hauppauge do the same as VLC and find their own HW and talk to it.
On another Dell XP Pro machine (at work)  which had seen another older WinTV-USB Pro before , it took HCWCLEAR and about four reboots to get the Hauppauge WinTV HVR900 to actually work

Navigate the install CD and  install the DirectX9 directly from the installer in the DIRECTX9 directory folder. Then run the winTV installer.

In other words : the drivers dont work until DirectX9 installed. Most people will have installed a game using DirectX  before WinTV, but as soon as updated OS with a clean install is tried, this error appears.


Place card in another machine with DirectX9 installed already. Install card on this machine. Remove card, replace in original PC. I am suspicious of  this 'fix' it might have been really due to a destruction of my Win98SE install by the inadvertent 'install' of  'BeyondTV

I bought this in PC World as a white label low cost re-pressing of the game DVD, having been an avid follower of the TV series where your team played tactics (Generals ? )  against another team fighting a classical battle and the game would be played out in 3-D using AI, and at the end a military tactician lecturer from Sandhurst Military College used to lay into the blunders made by some teams.

It would not run on my dual core laptop  but ran on single CPU machines.